We have successfully completed a wide variety of construction jobs ranging from siding repairs to whole house changing of siding and windows. Visit our Project Pictures page for a gallery of projects that we have completed.

We have recently finished several projects, we hope to get more pictures up soon. Dry Rot, Framing Repairs, Window Installations, Door Installations, Siding Repairs, Siding Replacement, and Painting are a few of the recent projects that we have been working on and we look forward to more business and more satisfied customers. 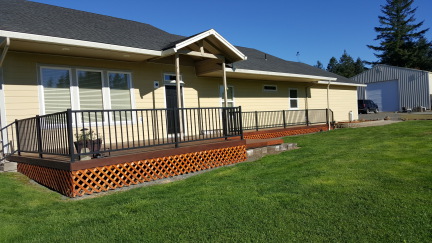 We recently finished a whole house replacement of siding in Washougal, WA. The existing siding was all cracked and in need of replacement. We tore off all the old existing siding and installed a new vapor barrier. We installed new James Hardie trim around all the windows to make the house really stand out. New Hardie corners and band boards were installed. We suggested that the homeowners add Hardie shake onto the gables of the house and once we had installed the shake siding the homeowners were really impressed with the new look of the house. The finished siding project looked fantastic and the homeowners were highly satisfied with the siding project. 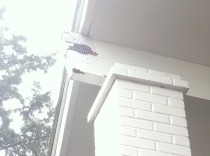 We came out to work on two beams that protruded out of the house over a two story carport/deck that were rotten on the ends. Weather had taken it's toll on the exterior portion of the beams that supported part of the roof and were a decoration for the house. The dry rot was affecting the beam up to the bracket support on the columns. The whole beam length was 20+ feet in length and would be a highly expensive project to replace so we discussed the option with the owner of replacing the beam up to the bracket and upon taking out that part of the beam we would be able to tell if the rot had gone further than the support bracket.

We were able to remove two beams upto the brackets, one that was larger and one that was smaller. Thankfully there was no rot and we reinstalled new beams and secured them to the old beams by metal straps and part of the bottom support column bracket. We then installed metal cap flashing to help the tops of the beams from weatherization. After painting, the project turned out looking great!

The owner was highly satisfied with our work, and best of all he was able to keep the oiriginal look of the house without any significant changes.

Check out our project pictures page to see our progress on the project!